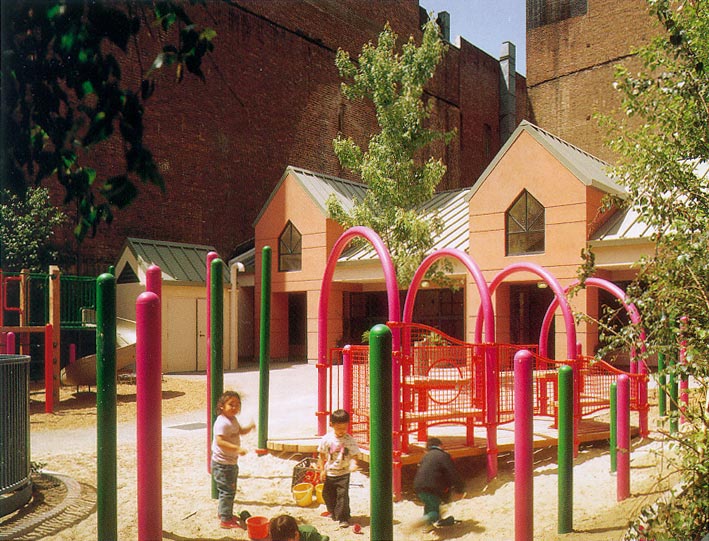 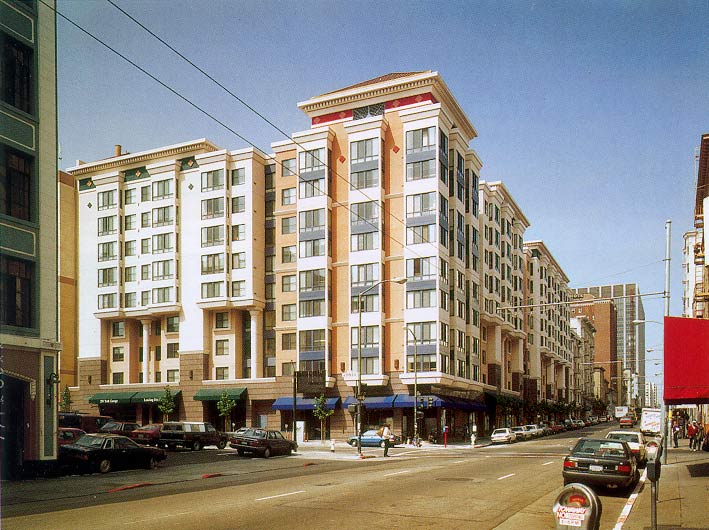 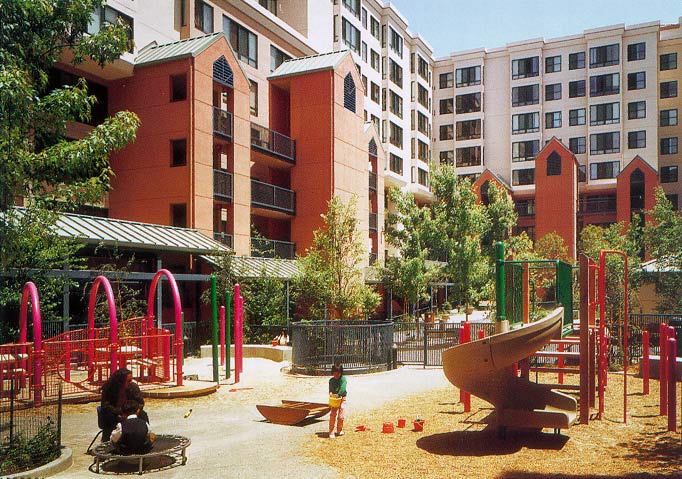 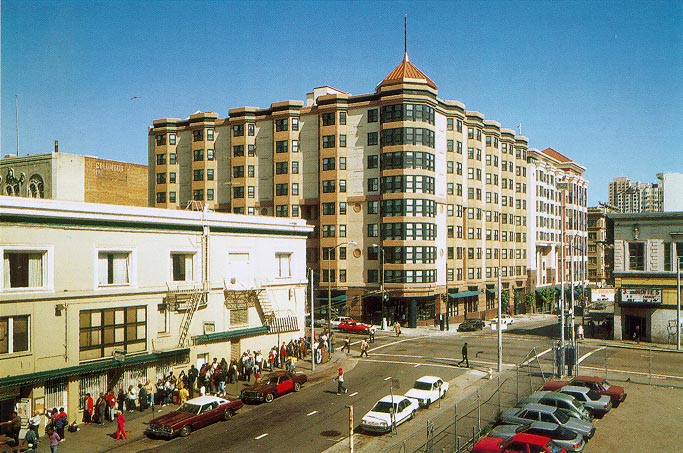 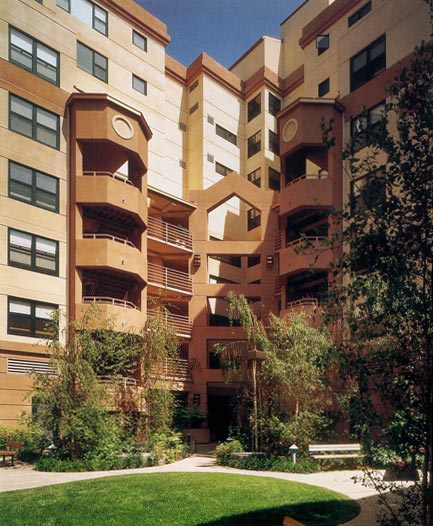 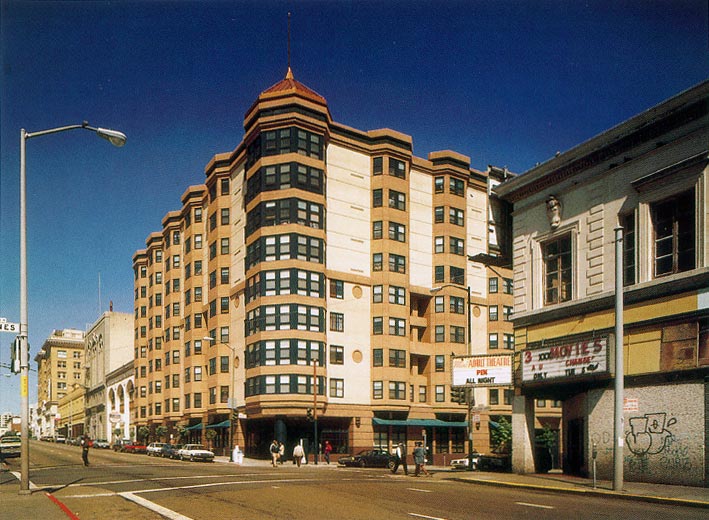 The conventional wisdom in the U.S. that high-density, high-rise affordable family housing is certain to have a negative effect on both residents and neighborhoods is not always correct. Two developments that encourage this revision are located adjacent to one another at 201 Turk Street and 111 Jones Street in San Francisco. At 225 dwelling units per acre these two nine-story buildings have a very high density, yet they do not appear out of scale in the dense inner city Tenderloin District. A spacious yet intimate courtyard behind the buildings relieves the density and provides secure play areas for children and relaxation areas for seniors. According to Merle Malakoff of Mercy Charities, HKIT Architects, who designed both buildings simultaneously, were successful in meeting the major challenge of reducing the impact of the buildings' height and density. On the street, the complex presents a formal, continuous facade of projecting bays. From the courtyard, three differently colored, horizontal divisions help the structures feel more villagelike. Larger family units on the second, third, and fourth floors of both buildings, have access to the courtyard via stairs and key-operated elevators and form clusters to facilitate the management of large numbers of children. These units overlook the courtyard to permit parents to supervise their children. Elderly residents live in smaller units on the upper floors. Because Tenderloin parks are notorious for drug dealing and other dangers, a safe outdoor area was one of the main concerns expressed during community meetings held during the design process. Approximately 5,000 children live in the Tenderloin; most of them are from families of recent immigrants crowded into single room occupancy hotels and studio apartments. Sherine Ta, a resident of 201 Turk Street expressed her happiness and relief at being able to live with the seven members of her family in a three bedroom apartment instead of the studio they had shared for 12 years after arriving from a Hong Kong refugee camp, "Like many families with low incomes, we could not find affordable housing. Today my family is extremely happy...the change has been like a dream." Residents are representative of the ethnic diversity of the Tenderloin; about half are from Southeast Asia, and the others are a mixture of Russian, African-American, Hispanic, and Caucasian ancestries. To effectively respond to these various cultures, management provides new residents with a personalized manual written in English and their native language, with tips for social services, safety, and other local issues. An independently managed childcare center located in 201 Turk operates two daily sessions that serve over 100 children from the neighborhood as well as the complex. The childcare facility is an integral part of this new community. It was sited to take full advantage of the open space within the protected courtyard. Multi-purpose spaces for cultural, recreational, and educational forums (computer training, for example) have proven their value by being completely reserved each weekend. As with many such endeavors, a highly professional and dedicated development team was key to handling the complex financing, design, construction, and management issues. Both buildings were planned, designed, and constructed using the design-build approach. Bringing the general contractors and their major subcontractors into the design process at the beginning enabled the development to be constructed on budget. As property manager Aiden McAleenan and residents exchanged a friendly greeting in the hallway he noted, "It's a great place and the people are great. Good management is one key to this ongoing success. At the front desk we have a scrapbook with a photo of every family, their names, and important information. This is a way to get to know everyone in the building, assist them efficiently in an emergency, and watch for overcrowding in the units." Security elements at both 111 Jones and 201 Turk include a 24-hour desk clerk, key-operated elevators visible from the front desk, and two-way intercoms in the garages. According to Arthur Evans, president of the company that entered a joint-venture with Chinese Community Housing to build 201 Turk, "People are amazed by this development. The federal housing administration sent their architects over to learn from it. The police and the neighbors say that this development has done more to reduce crime and raise property values than anything tried in the last ten years."