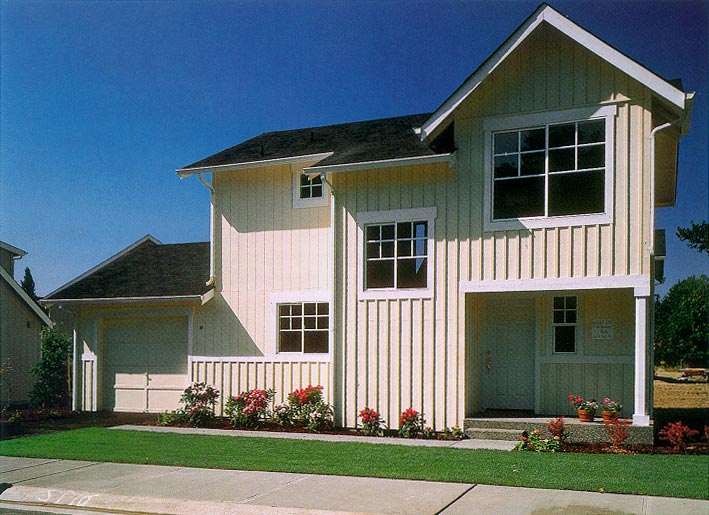 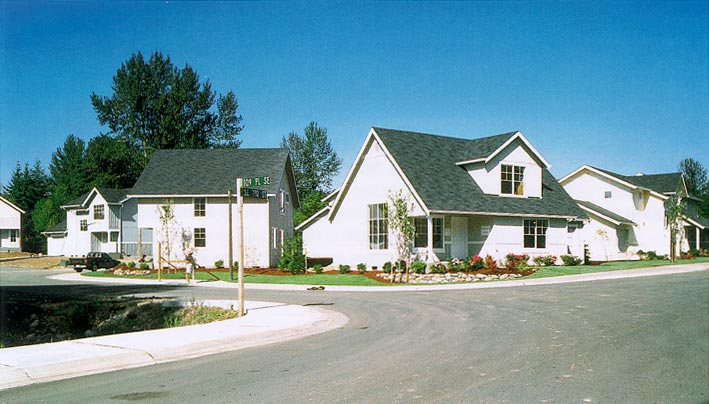 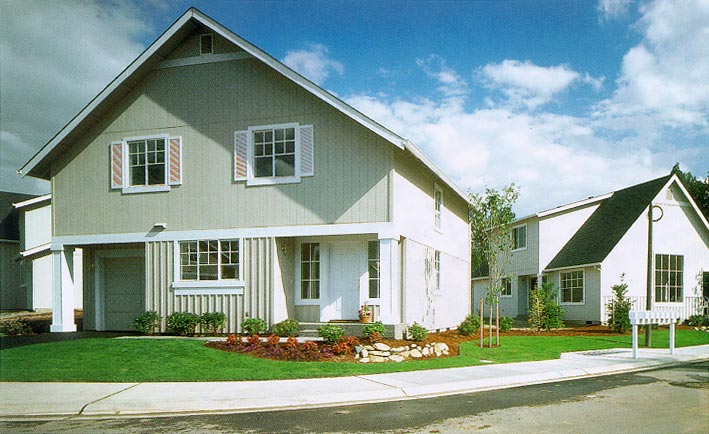 Located in Renton, a working-class suburb of Seattle, Benson Glen is an unusual single-family development. Near a Boeing factory, the neighborhood is racially mixed with a range of entry-level buyers. Although the houses have all sold and are well liked, Architect William Kraeger, vice president of Mithun Partners, concluded that, "The greatest innovation and community benefit is the potential now being realized for permanent changes and improvements to the codes, planning, and design review processes." The Benson Glen Report, published after completion of the development, has recommended changes which, if implemented, would greatly improve the production of housing in King County. 071aFor example, at Benson Glen required parking spaces were reduced from four to two, with one car in the driveway. This saved about $3,000 per unit, and reduced stormwater drainage from the hardscape. The width of the lots was reduced so that the garages could be placed at one side of the site and recessed to reduce their visual impact. Setbacks were also reduced to 15 feet, and the lot size was reduced to 3,600 square feet, which significantly lowered the developer's land costs. However, the restored wetlands adjacent to the site added a significant cost to the housing, and reduced the developable land area. A quarter acre park was built as part of the development and is an amenity for the whole neighborhood. 071b The 43 houses were built in four models. These ranged from a two-bedroom home designed for single parents with children to a three bedroom house with separate eating areas for adults and older children. In many of the homes the garages could be expanded for two cars, or converted to family rooms; a second floor can, in most cases, be extended over the garage by reusing garage roof trusses. Although buyers had to earn no more than 80 per cent of the area median income to qualify, they preferred the homes with larger, more flexible plans. In fact, one model proved so popular that the architect had to design a second exterior elevation to keep all the houses from looking alike. 071c Unlike many of these case studies, Benson Glen has no initial participation by the community in the design process. Market preference, purchasing power, and demographic information came from existing demographic data, and was refined by the non-profit's board, made up of bankers, an attorney, a builder, an architect/planner, and a marketing specialist. Simplicity and efficiency was crucial to keeping building costs low. The contractor worked on a cost and materials basis, constructing the buildings from one side of the site to the other in an orderly sequence. Although the houses are varied in respect to the character of the elevation facing the street, they were designed as simply detailed boxes of standard materials. The site is surrounded by a variety of building types, including a three-story condominium building and older single-family houses. The Benson Glen houses face the street in a similar manner to the older homes, creating a neighborhood with the character of a traditional American neighborhood.