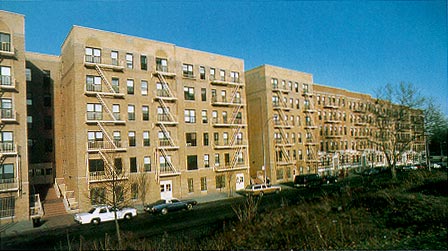 One of the largest housing rehabilitation projects in New York City, Crotona Park West, completed in 1994, involved the complete design and reconstruction of an entire community to provide 563 apartments in 20 buildings for 2,200 people in homeless families, and families with low and moderate incomes. The sponsor, Phipps Houses, selected the architectural firm of Levenson Meltzer Neuringer to design Crotona Park West. The development was subdivided into clusters of buildings on three sites, each with its own laundry rooms, community center, management and maintenance centers, commercial space, and adjacent open areas for recreation. Special service facilities such as day care, a training center, and a large tenant meeting room are located in one cluster but are shared by all residents and available to the larger community. Facades of the long vacant buildings were restored, preserving their traditional ornament and detail. Custom ironwork designed to be gates and other features, unifies the various architectural styles. The rear elevations are textured and colored to create a cheerful graphic composition that incorporates the fencing, lighting, windows, fire escapes, parapets, and other elements. Architect Conrad Levenson described the project goals as, "To promote community by design in all dimensions: within apartment units, among units on floors, among floors within buildings, between buildings, within each cluster, and between the three clusters." The rebirth of the Crotona Park community sparked revitalization of the larger neighborhood, and serves as a model and inspiration for development throughout the Bronx.

Gut rehabilitation of 20 vacant buildings into 563 rental flats and retail.