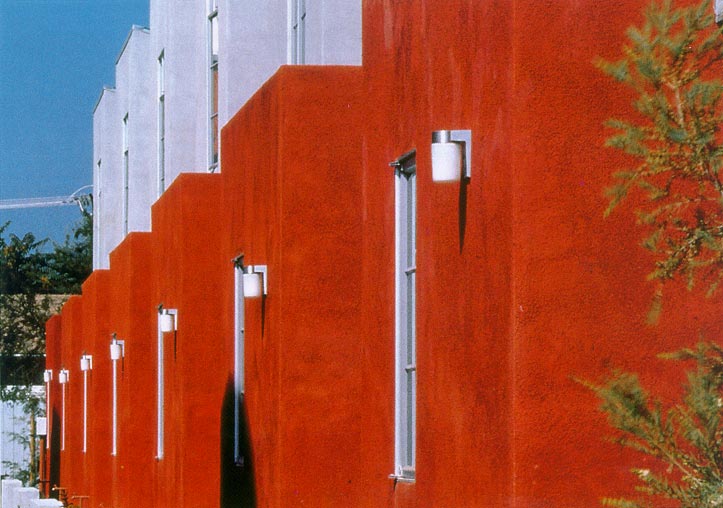 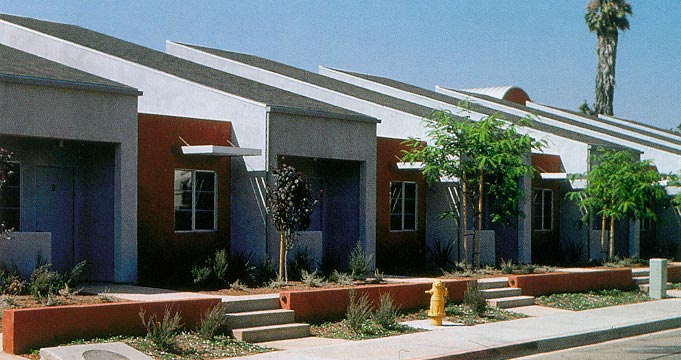 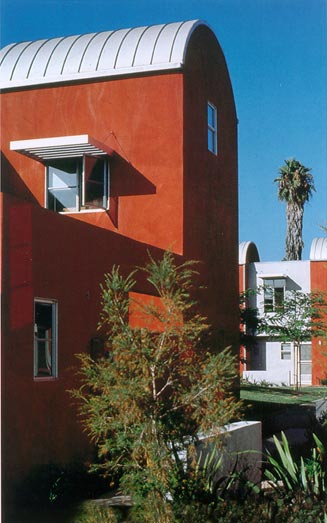 The need for affordable housing for people with low incomes is especially acute in California where land values and construction costs are abnormally high relative to most of the rest of the country. Among the neediest candidates for affordable housing are women with children; many applicants are new immigrants. Although Daybreak Grove is modest in size, comprising 13 units on less than an acre of land, it provides the families mainly headed by women who live there with security and the stability they need to get back into the mainstream. Daybreak Grove is located in a desirable neighborhood of single-family houses, apartments, and condominiums with schools, parks, stores, social services, and bus lines nearby. The city of Escondido is a rapidly urbanizing agricultural community northeast of San Diego with a large Latino immigrant population. Not surprisingly, the residents of the single-family area immediately behind the project site circulated a petition against the proposed housing that obtained over 100 signatures. Sponsoring the development was the North County Housing Foundation (NCHF), a nonprofit organization with a board of directors entirely composed of residents of the community. At least one-third are either members of low income households themselves or residents of low income neighborhoods, many the mothers of young children. A former mayor of Escondido with twenty-two grandchildren sold the site at a bargain rate to the NCHF. Approval for the housing was obtained after the developers dealt with many issues, including addressing the neighbors' complaints by increasing the height of the rear wall from six to eight feet, and removing windows from the north building elevations that faced the single-family neighborhood. NCHF applied for and received two density bonus units and a reduction in parking. The latter was an important victory because under the existing parking ordinance, the ten additional spaces required would have adversely effected the site plan and building design. According to Amy Rowland, Executive Director of NCHF, obstacles to the development that arose in the financing process were probably not unusual considering that it had six sources of financing, not including redevelopment and construction loans and grants. Because this was the first multi-family housing development that the City of Escondido had participated in City officials were eager to show that low income housing did not have to look low budget. This attitude encouraged the creation of a showcase design, one that set striking forms and colors in the traditional southern California setting of the bungalow court. Although few older bungalow courts remain in Escondido, they were familiar to board members, some of whom had recently rehabilitated one of them. Bungalow courts were popular and practical housing developments produced in great numbers from the 1910s through the 1920s in the suburbs of both southern and northern California cities. Small parcels of land could be developed to a higher density with modest buildings and still retain open space and even such amenities as fountains and pergolas. The open space framed by buildings on three sides suggested both community and privacy. Since the older bungalow courts were designed in the style of the moment, the use of contemporary forms and materials for Daybreak Grove is appropriate. Architects Davids and Killory, who are based in San Diego, have studied the Spanish legacy of urban planning. They consider the courtyard plan a useful settlement prototype and observe that, "the flexible courtyard integrates easily with other housing types, including single family. As neighborhood opposition to multi-family projects usually diminishes in proportion to their size, courtyard housing is a particularly suitable type for a variety of urban and surburban neighborhoods, especially smaller lots in stable residential areas." The contiguous units have a lively roof profile that alternates barrel-vaulted and shed-roofed forms on the east and west sides and flat and shed-roofed forms on the south side. The buildings step backward and forward, creating a variety of patterns as well as privacy in recessed entryways. The colors, deep red and grey, also serve to break up the forms. The basic uniformity and compactness of the unit plans is complemented by a rich variety of private and public outdoor spaces: a front yard and porch, a back yard and porch, as well as a small internal patio, which provides both a private outdoor living space and natural light and cross ventilation for the rooms. Having the kitchen face the courtyard acknowledges its importance to family life and allows supervision of children without interrupting housework. The courtyard has a laundromat, and an outdoor theater set in grassy play areas. The landscaping features drought-resistant shade trees, edible species such as citrus and pomegranite, and includes plots for gardening. In assessing the influence of Daybreak Grove, Amy Rowland observed that its existence and design qualities have made getting approvals on subsequent projects much easier. "Many other organizations have sent local decision-makers to visit to give them a positive impression of affordable housing." But she added that the positive impression made on city staff and elected officials by award-winning designs does not convert the opposition. "We recognize, Rowland said, " that the main thing that will convince the neighbors is wise tenant selection and good, sound property management practices over many, many years."