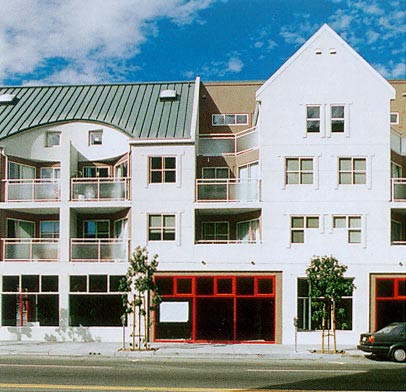 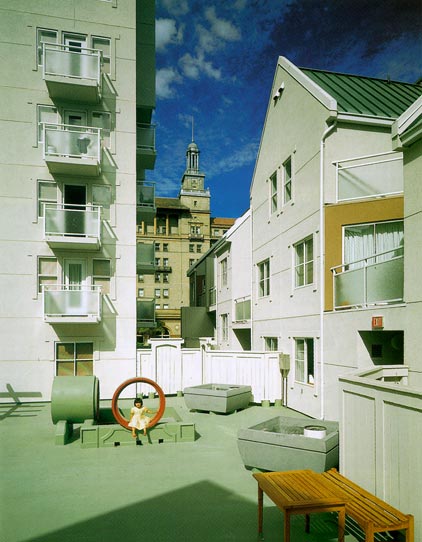 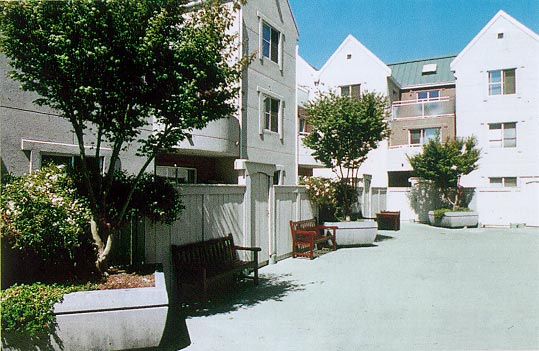 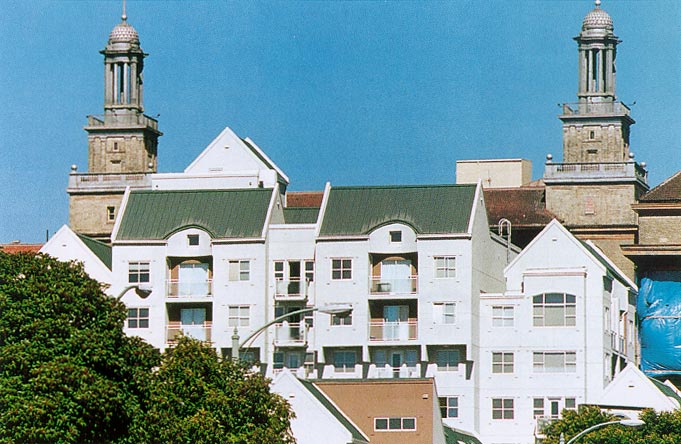 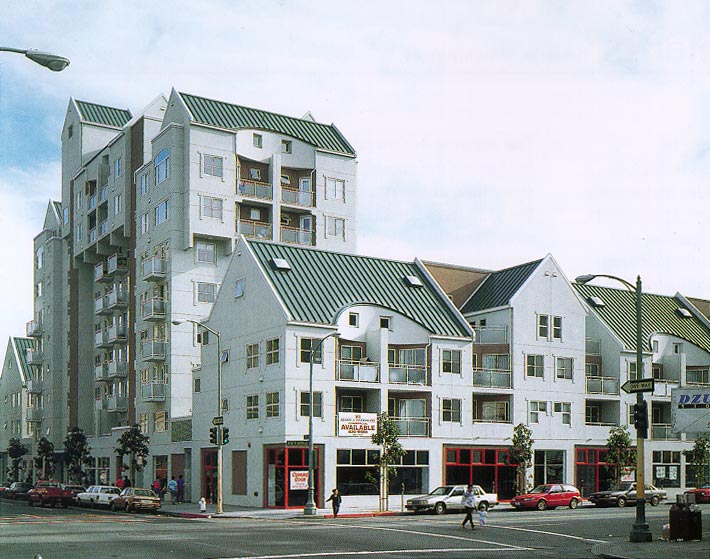 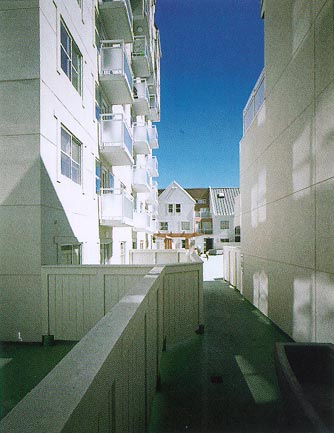 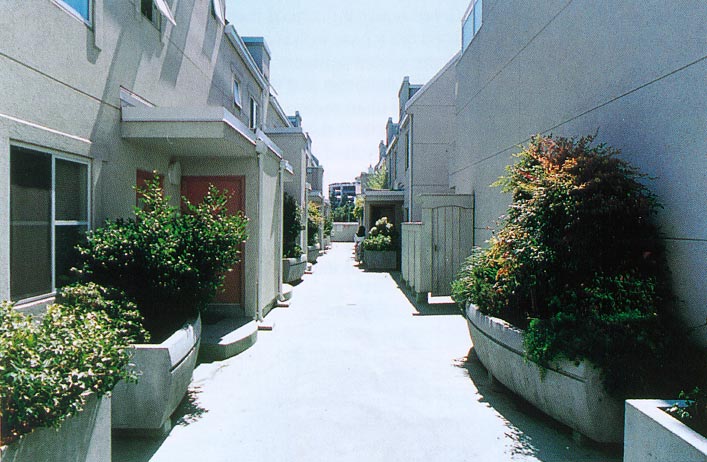 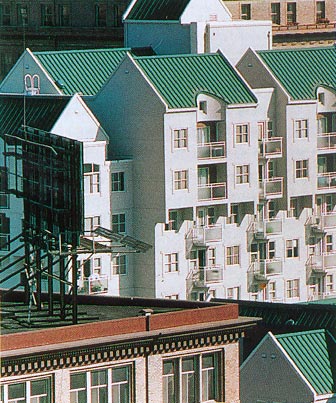 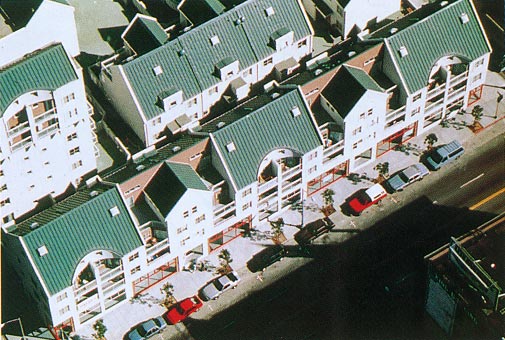 The Frank G. Mar Community Housing demonstrates the validity of high-density, mixed-use housing for inner city areas. It addresses the needs of Oakland's growing Asian community for three- and four-bedroom apartments to accommodate an influx of large families into the city's Chinatown neighborhood. The location of the Mar housing complex on a block size former parking lot has helped revitalize the downtown commercial district by adding a resident population of about 300 adults and children. The proximity to shopping, transportation, work and the other services is a boon for the residents. The 119 units are above street level commercial space and a two-level underground parking facility. Double rows of two-and-a-half-story units for families occupy buildings that line two streets and part of the interior of the block. Designed to appear as townhouses, each of these 54 units has an outdoor yard and a separate entry, eliminating the need for double-loaded corridors and enabling the front and rear of each unit to have natural light and cross ventilation. In fact, the townhouse units with high ceilings, skylights, and mezzanine bedrooms are full of light and belie their small size. A nine-story building contains the 65 residential units for the elderly. At the center of the complex is a large open courtyard, which serves as a protected playground for the many children at certain times of the day and accommodates the elderly and other residents at quieter times. A laundry room and a community room also flank the courtyard. Property manager Bill Leung has observed that the courtyard is used in a variety of ways, "Sometimes meetings or celebrations are held there, and sometimes meetings held in the meeting room (adjacent to the courtyard) spill out into the courtyard. Children ranging in age from 4 to 18 play in the courtyard after school and before dinner. Seniors come out at dawn to practice tai-chi and jog, and then later in the day after the children have gone in for dinner." According to Leung, the apartments, although generally liked, have gotten mixed reviews, "Some people like the high ceilings because they remind them of their old houses in China, while others find that they make too much space to heat. Some people like the open loft bedrooms for children, so that they can't lock themselves in, while others feel that there is not enough privacy in them to use as a master bedroom, making the unit less flexible. Some larger families say they would rather have extra floor area than the high ceiling." The architects, MacDonald Architects, sought to give the project a sense of individuality, to keep it from projecting the image of a large housing project. Gable roofs signal the residential character of the complex; the different heights of the buildings and alternation of the roof forms contribute to a picturesque, village appearance. The architects have successfully integrated this large complex into the urban fabric by breaking up its massing so that the midrise block of apartments for the elderly faces a block-size former grand hotel of 1910 of the same height and the lowrise family units face buildings of comparable size and also have separate entryways to give them some individuality. Front entrances that cluster on pedestrian lanes leading to the courtyard encourage neighborliness. At first the architects wanted to incorporate ungated stairways leading from the street level into the central courtyard. However, the concerns of the property management over security resulted in a single pedestrian entrance controlled by an intercom. This control has effectively addressed the problem of access by non-residents. Although the division of the garage into resident and public parking prompted fears, security problems have not materialized. Security has proved to be so effective for the central courtyard that parents are willing to let their children play there unsupervised. The original program projected 80 units of family housing to be constructed over commercial storefront space and grade-level parking for the residents. Thomas Lauderbach, who was the project manager for the East Bay Asian Local Development Corporation (EBALDC), reported that, in response to shortfalls in the funding, EBALDC sought and obtained a federal Housing Development Action Grant through the City of Oakland and offered to assume the development of a public parking facility. As a condition of approving the HoDAG loan application the City required additional units, which increased the total number to 119. Lauderbach also stated that considerable negotiation took place with the City planners over many general and detailed issues. As an example he cited the change from typical iron balcony railings to translucent glass balcony walls which, though more costly, did address the planners' concern that the buildings' appearance would suffer if the belongings that residents would be likely to store on their balconies were visible. This solution addressed the problem and still allowed light to enter the dwellings. The design and development process faced many hurdles that were overcome in inventive ways. With more than ten sources of financing the process was complex, to say the least. Subdividing the property into four parcels created a condominium with air rights and facilitated the commercial and public parking components. But this organization also added to the complexity and legal costs of the project. A very successful fund-raising effort permitted the debt-free development of the commercial portion of the project. As a result, an owner-subsidized childcare facility was given rent-free space in the project. Reflecting on his experience with the Frank G. Mar Community Housing project, Thomas Lauderbach stated that, "User input is necessary to long-term success. The more opportunity those who are effected by the project have to comment on it, the better the facility will function. I am guaranteed of making a mistake if I assume instead of ask what will work for the future residents or the maintenance personnel."