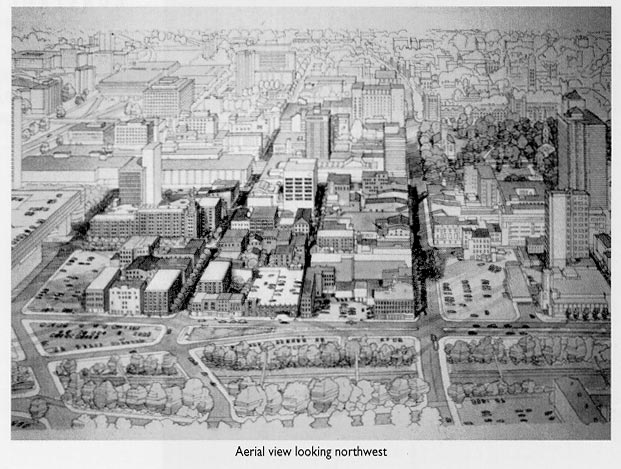 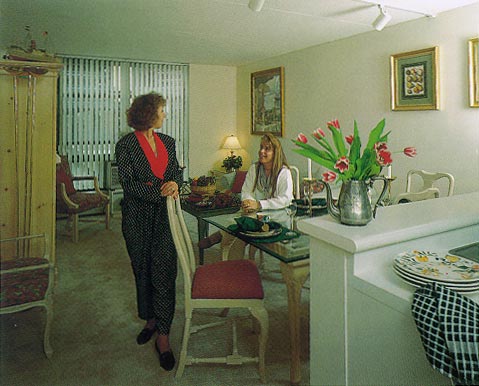 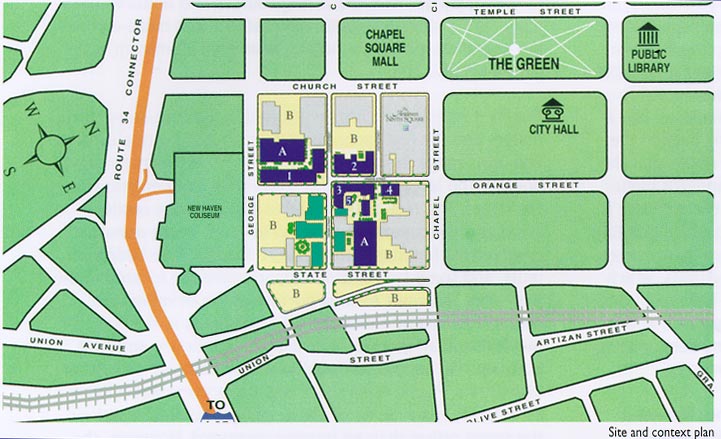 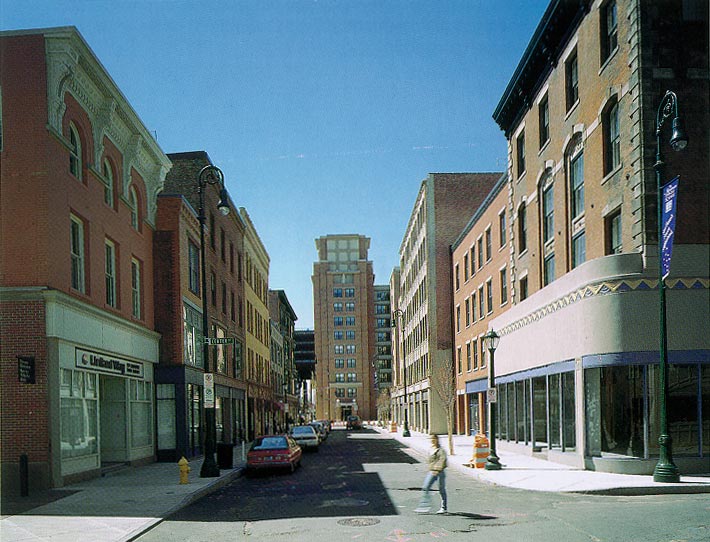 The name "Ninth Square" was given to one of the original nine squares of New Haven's town plot, which was laid out in 1638. It was the last of the city's original squares to be redeveloped, and, as a result, many of its historic buildings were vacant or underutilized. In the early 1980s, the City of New Haven began the process of nominating the area to the National Register of Historic Places. The city's goal was to facilitate private investment in the Ninth Square's historically significant architecture. At the same time, a group of outside investors, planners and preservationists approached the city with an ambitious plan for redevelopment. Inspired by the energy of the outside group, city staff and citizens came together to plan a revitalized safe, attractive, well-managed, urban district where a diversity of people live, work, shop and play. Creation of a district improvement association known as the Ninth Square Association (NSA) comprising property owners and tenants grew out of these early planning efforts. However, by 1985 it became clear that the original development group would not succeed. The NSA, the City, and other downtown interests sought a replacement developer and, in 1986, chose McCormack Baron and Associates, Inc. (MBA) of St.Louis, Missouri, a firm that specializes in urban affordable housing. Together with its partner, the Related Companies, MBA steered Ninth Square through the downturn in New England's economy and on to completion in the spring of 1995. The first 24 apartments on Orange Street opened in early 1994; they were followed by 311 more apartments which opened later in 1994 and early 1995. In the first phase over 500 residents will live within walking distance of all that downtown has to offer, including Yale University. Newly paved streets, new trees, sidewalks, and historic lighting standards create a safe and attractive place. Local merchants hope that the shopping and night life will attract students, workers and visitors. Low-income housing tax credits helped finance the development and provided the guarantee that more than half of the apartments would be affordable to such households. If the neighborhood continues to revitalize, the financing restrictions will keep those units affordable for households with modest means. Richard Baron, President of MBA noted, "We received considerable and necessary support from the local community for Ninth Square over the years, although many doubted we would succeed when the economy went into a tailspin. We simply refused to give up and kept on pushing." Resident and Ninth Square Association board member Bill Sherr enthused, "This neighborhood has fantastic potential. I hope this is the start of a lot more building and development in the area." Master Planners Herbert S. Newman and Partners saw restoration of the historic architecture as key. Upper floors of existing structures have been converted to apartments and ground floor spaces readied for retail. Voids along the street were filled with new mixed-use buildings and two parking garages -- all detailed to match the character of the historic structures. Rear lots have been cleared to create landscaped courtyards within the blocks. Stonehill House, the taller of the new apartment buildings, is an L-shaped structure with seven- and nine-story wings and an eleven-story tower at the intersection of two of the main streets. In Ninth Square it is a neighborhood landmark and a symbol of the hard work and vision that is making downtown New Haven an affordable and exciting neighborhood.