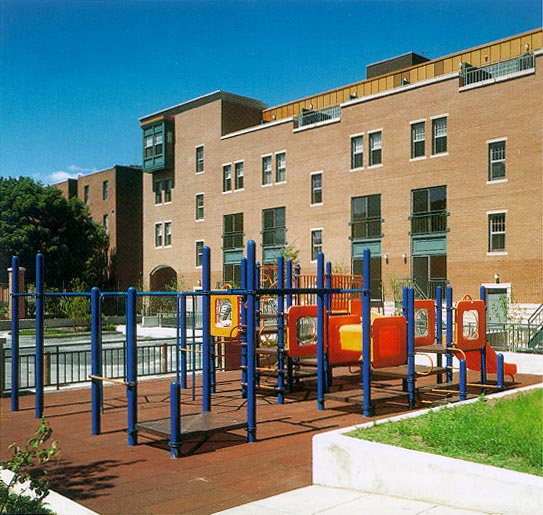 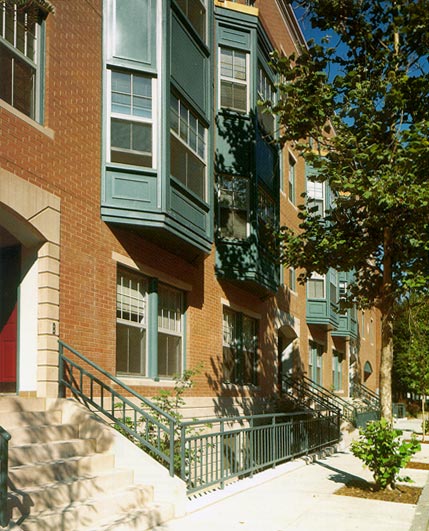 Roxbury Corners stands on two parcels of land in the Lower Roxbury section of Boston's South End historic district. The westerly parcel has a new structure of four-and-a-half stories; two rehabilitated buildings and a new four-story addition stand on the other parcel. Surrounding buildings are multi-family, low-income housing projects in high- or low-rise blocks that date from the last 25 years and 19th century brick row houses with front stoops and mansard roofs. At 65 dwelling-units per acre, Roxbury Corners is less dense that many of the nearby buildings. Roxbury Corners was part of the South End Housing Initiative, the goal of which was to develop good, multi-family, affordable housing with some form of homeownership within the context of an overheated real estate market that excluded many people with low incomes. Community groups participated extensively in a series of community meetings and voiced their concerns about architectural design, security, parking, and site planning. The United South End/Lower Roxbury Development Corporation (UDC) was created in 1979 to participate in a wide range of business and real estate development activities that create employment and housing opportunities for people with low and moderate incomes and people of color. Prior to the construction of Roxbury Corners, this section of Lower Roxbury was abandoned. Now, almost 6,000 square feet of commercial space is leased to businesses that provide goods and services previously unavailable in this part of the neighborhood. According to Syvalia "Val" Hyman, III, President and CEO of UDC, Roxbury Corners has had a significant positive impact both physically and socially on the neighborhood. Mr. Hyman recommended that affordable housing should always be designed from the beginning, "with the highest quality products and amenities. It is virtually impossible to significantly upgrade already specified products and amenities in a development, even when funding is available." The development had to undergo review by the Landmarks Commission in respect to set-backs, height, materials, and architectural detailing--all of which had a major effect on the design. Because so many agencies, as well as the non-profit developer and the development consultants, had the right to review the design, the process was quite lengthy. According to architect Fernando J. Domenech, "It was a great challenge to design buildings that met the desires and expectations of many groups with very different agendas. Also, affordable housing developers do not have a real project until their financing is in place, and then they must move quickly to obtain occupancy in time to meet their tax credit deadline. Given the complexity of this development, preparation of construction documents under those constraints was very difficult." Daniel DeSantis, a neighbor, stated in a recent interview: "Over the past few years, I have had the opportunity to mix with the residents of Roxbury Corners over crime issues in the neighborhood. Boston's South End is an ethnically and economically diverse community so the people at Roxbury Corners are not significantly different. Someone's income should not be a concern to neighbors. I think it is very important for affordable housing to blend in with the surrounding structures so that residents feel they live in a place as good as everyone else's. Roxbury Corners achieves this very successfully."