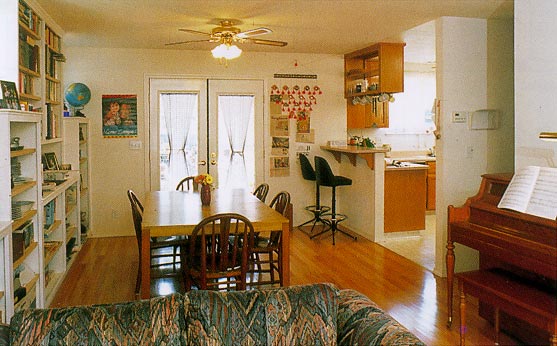 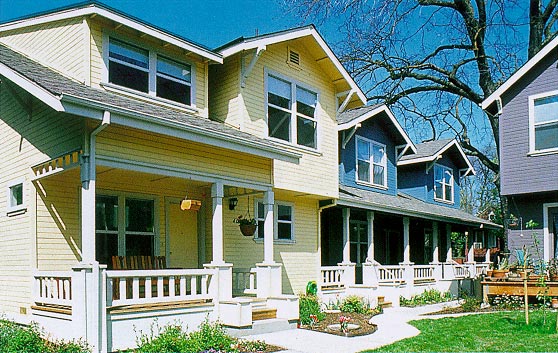 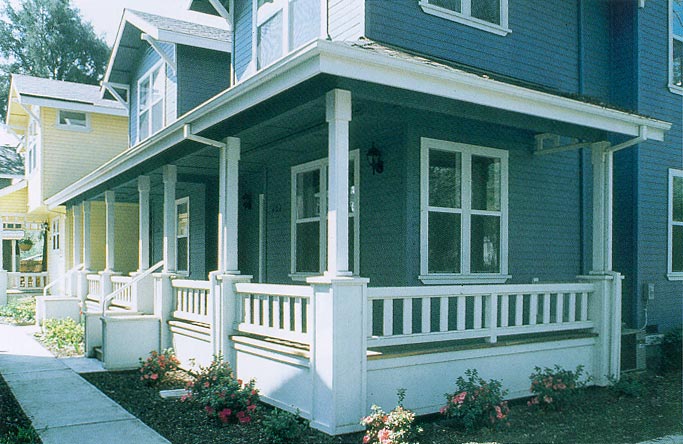 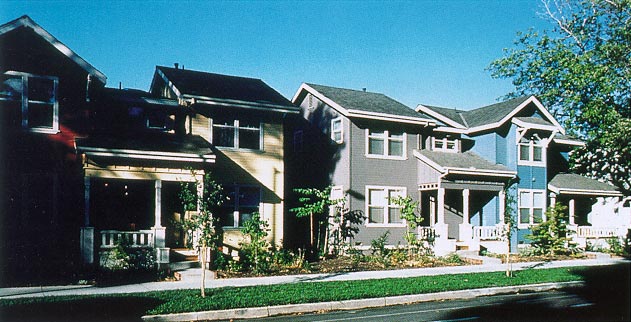 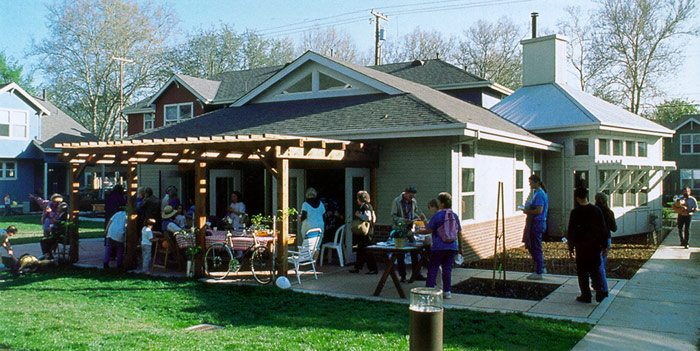 This 25-unit housing development is located in a neighborhood that had declined drastically while speculative developers waited to replace the houses with office buildings. It uses the co-housing model imported from Denmark and advocated by architects Charles Durrett and Kathryn McCamant, which requires the residents to cooperate in designing their homes and to agree to share in such activities as the preparation of dinners for the community. Southside Park residents' homes are grouped around shared facilities for dining, recreation, laundry, and gardening. Low-income families or individuals occupy five of the units; six houses are for people with moderate incomes; and 14 were sold at market rates. Some of the people who bought houses had been renters in the neighborhood. Although the homes sold for moderate prices, they had such amenities as hardwood floors, wood siding, and porches which, because they were agreed upon well in advance, cost less to provide. According to David Mogavero of Mogavero Notestine Associates, the project architects, co-housing costs less because most of the units are pre-sold; thus the developer's risk is minimized and the need for a brokerage firm is eliminated. Co-housing also enables residents to economize by using the community-owned dishwashers, laundry machines, and gardening tools instead of buying them. Despite the economic benefits, co-housing's main attraction is social. Southside Park's advantages for working parents and their children are so significant that residents compare the community to an extended family. Owner Laurisa Elhai said, "Most of us came into the group because we wanted to live in a real community, not a neighborhood where you don't know anyone. The kids look out for each other, and adults take an interest in all the children, not just their own." Speaking about the community dinners held in the common house Elhai said, "It's such a luxury to come home after work and have someone else cook and clean up, and I can just sit around afterwards and talk because my children go and play with other children." As an infill development Southside Park also demonstrates that automobile-dependent suburbs are not the only option for those who want an attractive and safe place to live. Another resident and founding member, Dale Crandall-Bear, stated, "We wanted to reduce our dependence on driving everywhere, and we didn't want to run away from reality to the suburbs. We knew that raising children in the inner-city would be a challenge, but there is security in being in a group." The design promotes security through owner involvement instead of using fences, gates or alarm systems. In fact, security was another issue that helped residents engage the community. Car vandalism was the main problem, and when kids from across the street confessed to doing some of it, the Southside Park residents put up a basketball hoop to provide other outlets for their time and energy. Resident David Mandel explained, "We are trying to get to know the neighbors and revive the dormant neighborhood association. This is the way we are dealing with security issues." Motivation toward community notwithstanding, co-housing has its caveats. American are perhaps less inclined toward consensus in all community decisions than the Danes, who live in a very small country and have a tradition of cooperative living. Planning co-housing usually takes more time than conventional housing--Southside Park took over four years to plan--and prospective buyers must understand this and set their expectations accordingly. Bureaucratic hurdles cause major problems as, for example, when the redevelopment agency would not give the Southside Park group title to the land until they had the money to purchase the property, and the banks would not lend money without proof of a title. At the same time the group, which now had 11 families, faced major expenses such as hiring consultants and architects. All was resolved after a long and difficult process. David Mandel described the site planning process, which consisted of workshops run by McCamant and Durrett, "For the site planning, we broke into two groups and used modeling kits to explore alternatives. Each group presented their alternatives, and when it became clear that one of the plans was better, it was more or less the final design concept." The architectural design was developed by Mogavero Notestine Architects with gabled roofs, front porches, and horizontal siding to fit in with the turn of the century houses in the neighborhood. Southside Park is located in an historic district. The 100-year old Potter house was restored and integrated into the development in one corner of the site; two units were put into it. George Branson, a neighbor who helped build support for the co-housing observed that, "This development has taken a blighted corner of the city and transformed in into something really nice. There is hope for the older buildings, some of which are being rehabilitated. I would like to encourage other neighborhoods that are reluctant about this sort of housing to visit Southside."