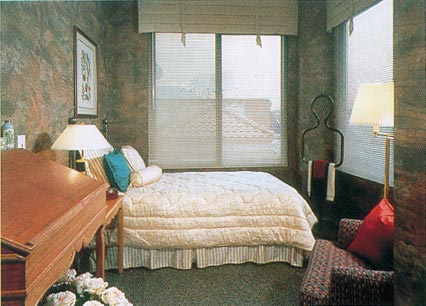 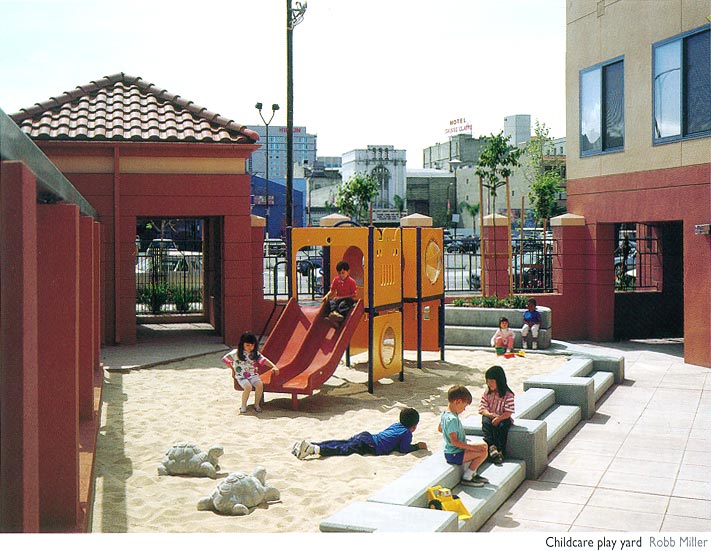 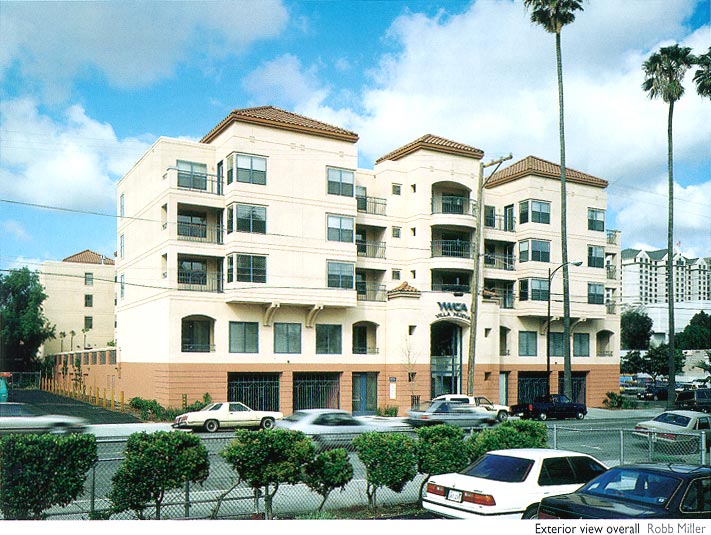 Villa Nueva is a successful solution to a complicated mixed-use program of secure affordable housing and accessible public facilities. The Young Women's Christian Association (YWCA) had been providing housing and services for poor women and their children in downtown San Jose since the early 1900s. The 1980s brought an increased demand. A steering committee headed by boardmember Mary Kelley developed a strategic plan and identified key partners whose expertise would be essential. These included Supervisor Susanne B. Wilson (who ultimately raised three million dollars in private donations for the development), the City of San Jose, and BRIDGE Housing. Kelley noted, "The City was very receptive to our ideas." Ben Golvin, project manager for BRIDGE, pointed out, "A key challenge was to convince the Redevelopment Agency that transitional housing in the downtown would be compatible with new commercial development." Villa Nueva is a success, both architecturally and socially. The use of terra cotta roofs and a modern interpretation of the Mission-revival style allows the building to blend with surrounding structures. The structure fits gracefully into its urban setting, and acts as a transition from adjacent high-rises to residential areas at the edge of downtown. A compact five-story structure, the facility has 63 units of affordable housing on the upper three floors. The first two floors house a childcare center, a fitness center, a YWCA-administered career and personal counseling center, a women's crisis center, and a hostel for temporary housing. Two terraces serve the YWCA offices, while two smaller play areas serve the childcare center. The provision of separate and secure access for the different uses and their parking on such a small site was a tremendous challenge for the development team. Architect Robert Steinberg noted, "Three stories of woodframe housing over levels of concrete public uses and parking was a creative structural and code-conforming solution for providing a dense facility at a reasonable cost." However, the building did have to be classified similarly to a high-rise structure, requiring costly exiting and life safety systems. Although at the outset the YWCA had no development experience, Mary Kelley proudly pointed out that, "This development demonstrates that a group of women can conceive of, plan, and execute a $16 million development." Socially speaking, the building is a precedent-setting community resource. Although the YWCA has fulfilled its service and housing goals, both Golvin and Kelley note that it can be difficult to match your intended residents with the legal requirements of funding sources. Over half the resident children under 12 are now in the daycare program; the rest stay with relatives when parents are at work. The daycare and fitness centers meet critical needs of downtown office workers -- since completion more than 1,000 applications have been received for the housing and more than 20,000 households have utilized the program services.