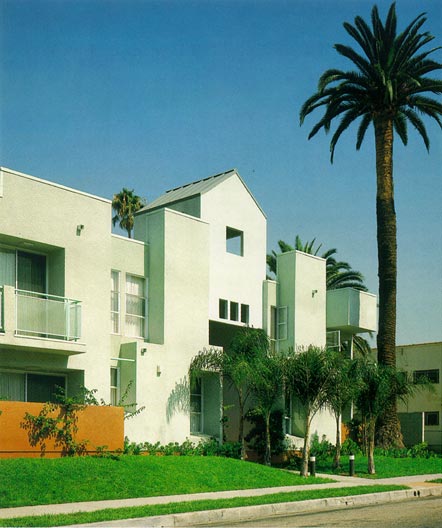 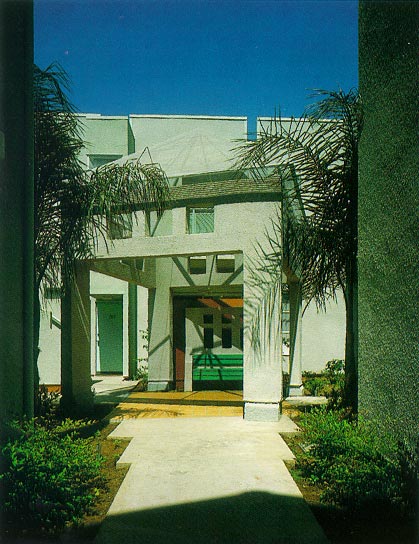 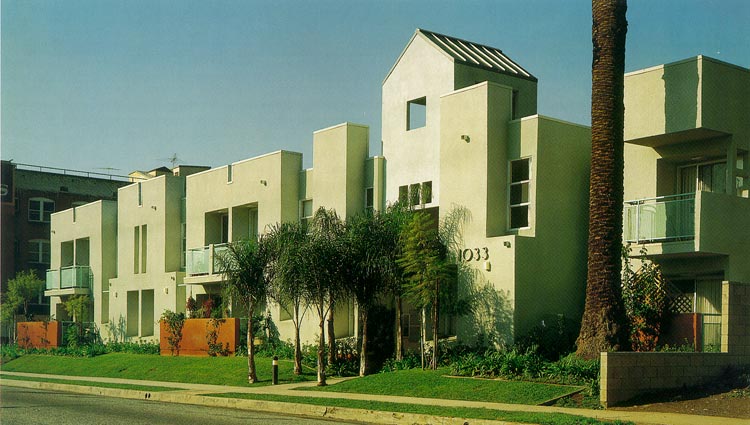 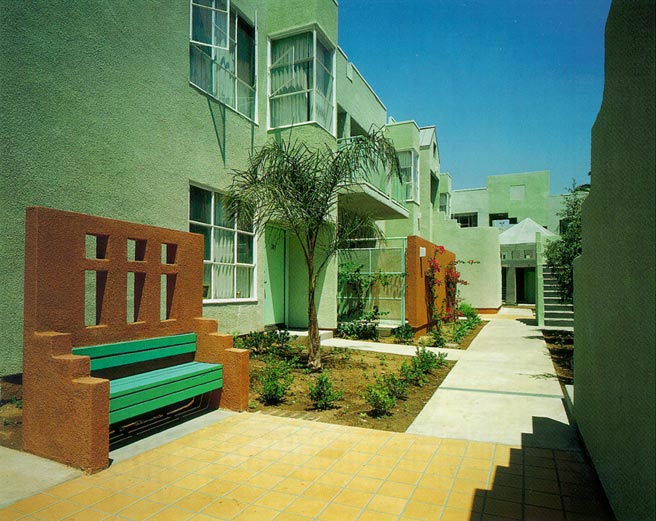 Yorkshire Terrace is an 18-unit infill development in Los Angeles's largely Hispanic, Pico-Union community. Located in a redevelopment area, it was developed by the Pico-Union Housing Corporation (PUHC), a branch of the Pico-Union Neighborhood Council (PUNC). Architect John V. Mutlow had directed the Pico-Union Neighborhood Council's planning and housing program from 1969 to 1973. He has designed eleven other affordable housing developments in the district--most of them larger than Yorkshire Terrace--that were sponsored by either PUHC or PUNC. This experience gave him a broad knowledge of the neighborhood and its residents. Once part of an affluent neighborhood, Bonnie Brae Street retains a stand of two-story wood siding early 20th century houses, most of which have been rehabilitated by the Los Angeles Community Redevelopment Agency (CRA). Many of the houses had been converted into four-unit apartment houses, but three of them, which stood on 50 by 150-foot lots, were demolished because they were judged to be economically unfeasible to rehabilitate. The demolition created the site for Yorkshire Terrace. Under the redevelopment plan 28 units could have been built (this number was half the maximum permitted by the zoning.) Only 18 units were built for a variety of reasons: a third of the site was designated for open parking, and two units were removed to provide an outdoor play area. In addition, Mutlow felt that housing for families should be limited to two stories, which fit in with the existing context. The stacked two-bedroom flats are organized around a central linear court, a space which fosters social interaction, and which serves as the entry to all of the units. The architects eliminated the need for air-conditioning by designing the buildings so that the court allows the units to receive light and air on a second side yet provides shade from the hot afternoon sun. Individual entries are sheltered by second level bay windows, and sliding doors to the outdoor patios are both recessed and shaded by balconies above. A gazebo with a pyramidal roof indicates the location of the main entrance from the courtyard and is a favorite place for residents to sit in the shade. The play area next to the laundry proved to be too small. According to resident Zilda Stone, a student nurse with three children, "Most kids don't play there because of complaints about the noise and about balls flying around." However, an old stagecoach also next to the laundry is a popular place to play. The building facades present a crisp composition of integrated modern forms that resonate with the architectural history of the Los Angeles region. Mutlow designed the street elevation with a 30-inch bay that contains closets and recessed windows, buffering those openings from the street edge. The stepping in and out of the wall breaks up the linear facade with a series of elements in scale with the context, enriches the play of light and shadow, and gives expression to individual units. Mutlow worked out a subtle palette of shades of green to further enhance the forms. However, since 1988, when the complex was finished, the colors have faded, and repainting patio walls has not been consistent, pointing up the necessity of scrupulous maintenance for the kind of stucco-over-wood-frame buildings that are standard construction in Los Angeles. In general, maintenance is excellent and the construction quality is good. According to Mutlow, "By working with the general contractor early on, you can lower the costs by learning how they build and where their major costs lie. The single unit type with three plan alternates, and the single plumbing wall for two units provided both simplicity and repetition which helped the client to obtain very good prices from the contractor." Pico-Union also involved the community during construction to help reduce theft and vandalism. Since security is a major concern because of neighborhood gang activity, there is a single intercom entry gate from the street. Parking is in the rear of the lot with one row of cars tucked under the back bedroom of the apartments and the other row open. Even though parking is secured by an automatic gate off an alley, Zilda Stone said, "People have jumped over the low walls in the front and stolen things from the cars." Manager Gregory Matthews acknowledges the walls are too low and says they are planning on making them higher. Stone said, "Management here is good. I like the place because it is open and breezy, and usually quiet." As with most affordable housing, the financing for Yorkshire Terrace was complex and required significant assistance and reviews from the CRA. Michael Cracraft of the CRA noted, "We strongly encouraged Pico-Union. The building is definitely an improvement on the surrounding area and sets a high standard. Unfortunately, there is not much affordable housing being built here any more." Despite this, more development has followed the housing. Next door is a neighborhood occupational training center for the older children run by PUNC, which, according to Matthews, is very successful. Stone noted that she too values the training center, saying, "It gives the children a better alternative to being on the streets."