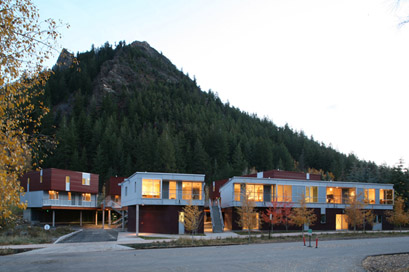 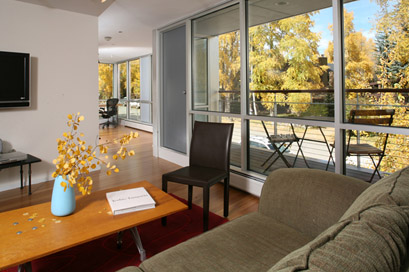 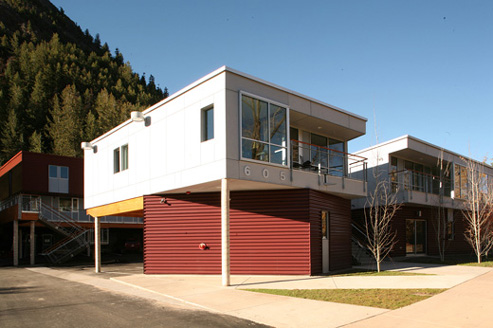 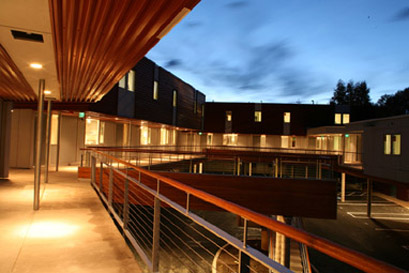 Little Ajax is situated between an established neighborhood and mountains. The project consists of 14 communally-oriented affordable family units. A skewed geometry allows the building to conform to the streetscape in front and the natural contours and vegetation of the slope above. A logical transition is thus created between the street grid of the city and the irregularity of the mountain landscape into which it terminates. The design integrates a dense program into a residential neighborhood by breaking the scale down into five "house-scale" elements. Uses of color and form create a modern insertion into a neighborhood with a mix of architectural styles.

Gluck and Partners acted as both architect and contractor with a great deal of community input and a subsidy from the city of Aspen. Previous mining activity on the site left a brownfield that was remediated through a voluntary state program. The site was very difficult, nearly unusable because of brownfield issues and a steep slope. Community opposition to affordable housing built within the Aspen city limits was also present. This was overcome through some concessions, including the elimination of the market-rate component of the project which allowed for increased open space and decreased density.

The design depends upon three angled “slots” that slice through the projects' site, breaking it down into an interconnected series of buildings containing between 1 and 6 units. Because the "slots" divide the building into smaller elements, nine of the fourteen units have a corner location with multiple view corridors and natural cross ventilation. Two public trail connections, located separate from the parking area, were also created through this skewed courtyard geometry. A series of second floor walkways are punctuated by playful bridges and lookouts and provide multiple connections to the units. Multiple circulation routes augment fire safety and provide privacy by insuring that most units are accessed without having to pass by neighboring apartments. Tuck under parking also reduces the building footprints while creating private house-like units. Parking fees are an incentive for residents to reduce the number of vehicles per person, which is possible as Little Ajax is highly accessible to pedestrians and cyclists. Covered bike storage is located near units, and in addition to the public trail connections, the project is within one block of local bus lines.

Dedicated open spaces have been created with low-maintenance natural plants. Natural grasses and wildflowers act as drought-resistant landscaping, while all stormwater is kept on-site using dry wells. Dual flush toilets were also installed in the units.

The building was designed to exceed the energy code by 15%. Compact fluorescent and fluorescent lighting was used in units and public lighting is controlled by motion sensors. Continuous window walls create a high degree of daylighting. All units are served by a centralized hot water heating system, highly efficient boilers with outdoor resets, and mechanical ventilation.

Notable materials used at Little Ajax include heavy gauge corrugated metal, cement board, bamboo floors, finger-jointed studs, recycled content carpet and blown in cellulose insulation. Engineered lumber was used for some floors as well as the roof, which is ventilated and has a high solar reflectance index. Indoor air quality was a concern; the architects specified low-VOC paints and finishes, pre-finished floors, and mechanical ventilation to bring in fresh air. Moisture is managed through rain screens and an air space between the exterior envelope and waterproofing. No air conditioning systems were installed. During construction, cardboard, paper, metal and wood were recycled. Post-construction, trash compactors reduced trips to the trash room and the number of pick-ups required by the trash company. The large trash room accommodates multiple bins for recycling which are built into the cabinetry in the units.

To help ensure that the units remain healthy and energy-efficient, the architect provided detailed operating manuals for all building occupants. They also aided in securing building maintenance contracts with the mechanical subcontractor.

Lessons Learned from the Architect